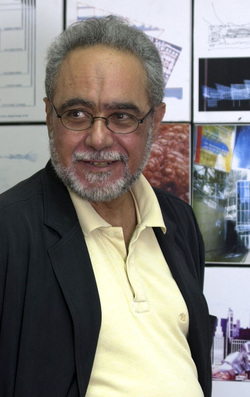 Abdelhalim Ibrahim Abdelhalim was born in a small town in Egypt and has tried to retain the values of his youth. He has intentionally resisted those forces of  contemporary life that he has seen as threatening to them and his entire career as an architect may be seen as his personal guest to do so. That career started in the Department of Architectural Engineering at Cairo University in the early 1960’s, at time in which the major educational paradigms were Classicism, for historical precedents  and International Style Modernism, in design. No deviation from this dual track was allowed. The focus of this approach was so narrow, that Abdelhalim now characterizes it as “indoctrination” rather than education. He does admit, however, that he learned how to graphically present his ideas well during that time.

In Cairo, as elsewhere in the world at that time, Modernism was being reduced to programmatic functionalism in schools of architecture, because it was more expeditious to teach it that way. The teaching approach was to present architecture as being scientific and rational, exclusive of regional variations or social differences, so that it would more easily apply to a global; constituency.