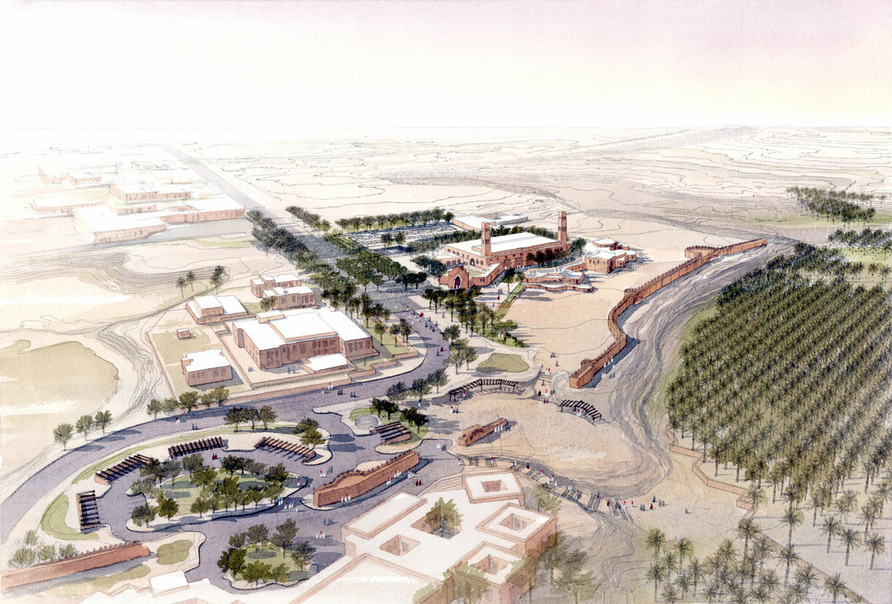 The site is divided into three distinct areas separated from each other by walls or buildings. They are the mosque and the plaza area, residence for Imam and Moazin, and lastly a large garden part of which will contain plant samples from different parts of the Kingdom. In the southern part of the site there is a library and a multi-purpose hall. The mosque is designed along tradi-tional local style, with a small court-yard. It is a rectilinar building with two square minaretes. The mosque is designed to accommodate some 2000 male worshipers. Within the mosque there is an area designed to accommodate 700 women worshipers, but it could be incorated into the main mosque space if the need arises. The structural system of the mosque uses a square grid, with columns 7.20 meters apart. The two minaretes have exposed stairs, similar to traditional minaretes in Najdarea and to the neo-traditional minaretes in the Diplomatic Quarter and Kasar Al Hulcum area. There is a large plaza in front of the mosque which can be used for open-air prayer or ceremonies. In one corner of the plaza the designer proposes a tent which can function as wind tower and it could be used for poetry reading or similar activities.