Four main themes have been identified to capture the spirit of Marrakesh in the Imagineering Phase.
As a HIGHLIGHT OASIS and a crossroad of ethnic and cultural traditions.
As a FOOTHOLD OF TRADITION (mystical, esoteric Islam), whereby Islamic learning expanded into western and sub-Saharan Africa.
As a SYSTEM OF ECOLOGICAL EQUILIBRUIM that has been critically maintained between dense urban pattern perforated by a hierarchical system of courtyards, on the one hand, and a series of gardens, orchards and palm groves on it periphery, on the other hand.
SAHAT AL-FANA’ constitutes the socioeconomic, urban and visual anchor and focal point for the city as a whole, establishing a microcosm of Marrakesh as melting pot of colliding traditions: Arab and Berber, Sufi and Orthodox, Urban and Natural, Commercial and entertainment. 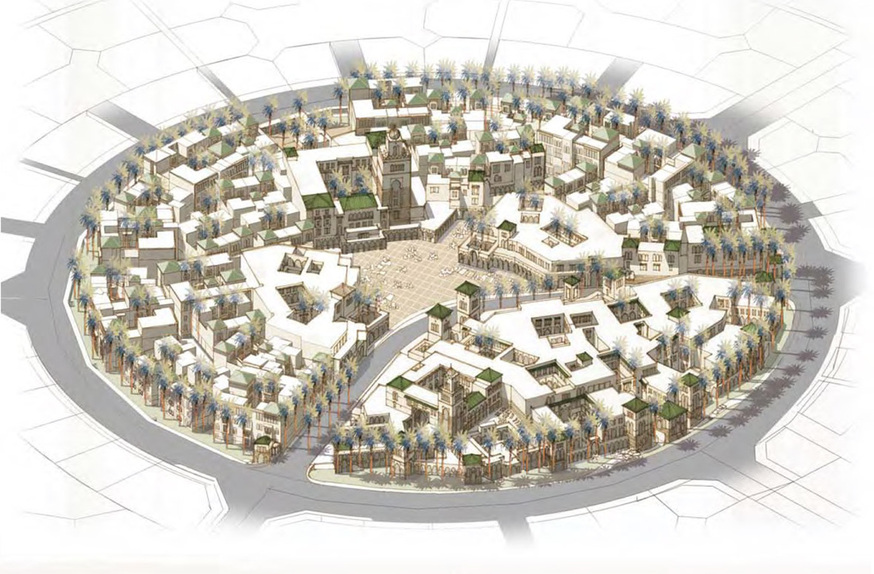 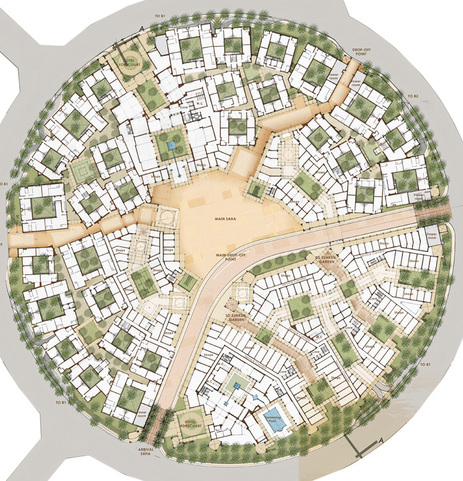 The Concept Design Phase emphasizes the complexity of the circulation and network systems characteristics of traditional Moroccan cities. In contrast to Damascus, for example, where the Roman grid and subsequent irregular fabric are evident in its urban order and architectural character, Marrakesh is typified by a maze-like circulation network and interlocking clustering system that highlight its mystical quality and diverse urban typology. Second, the oasis metaphor is manifest by its clearly defined edges, depressed setting surrounded by palm grove in a peripheral (Sunken Garden),as well as it marked entrances radiating from its center and accentuated by gate towers. Courtyard gardens, thirdly, establish the main spatial unit organizing its urban order, including the diverse functions they accommodate, as well as the unique Moroccan architectural expression and visual character. Finally, Sahat al-Fana 'remains the quintessential element that captures the spirit of Marrakesh. As a complex setting, in both spatial and temporal terms, this central plaza is an extremely vibrant node of versatile activities, events and visual orders, evoking all senses and engaging its diverse users. Moving to or from sahat al-Fana ',radial streets and alleyways are a testimony to the primordial transition between two experiences, bridging tranquility and mystical qualities, on one end, and everyday necessities, on the other. Marrakesh, thus, declares itself at the center of such web of experiences and conditions.