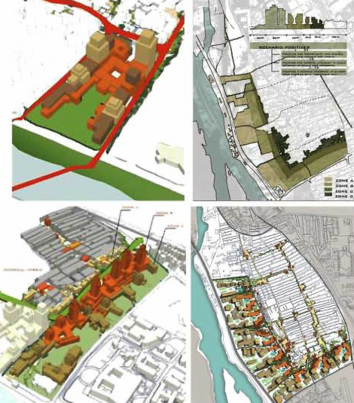 The city of Cairo is moving into a new stage. A mega-tropolis by virtue of its size, Cairo faces not only pressing quantitative challenges such as accommodation of increasing population, traffic, housing, infrastructure and environmental needs, but also in addressing questions of quality and creative visions of development.
From a broader perspective, Cairo’s current dilemma is twofold: 1) on the periphery, informal development is encroaching upon its agricultural land, 2) its core, on the other hand, is decaying in both urban and vital terms.

The current condition of the site conceives an aggressive interface between speculative modes of development, in response to which our vision aims to transform into a process of regeneration. It hopes to derive from the current process of development a cyclical ability to give back to its surrounding initial components.
This process, unlike previous patterns of real estate development along the river, is one which establishes a mutual relationship between economic and social development and investment opportunities. The vision proposes to:

Integrate Jazirat al-Dahab into a larger, viable city hub, Link up available stretches of land into complimentary urban development components, And create a centerpiece for development using Maadi Corporation Property as its kernel.